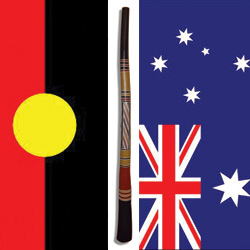 The didgeridoo is the sound of Australia.

Many countries and cultures have their signature sounds: Scotland, the bagpipes; Greece, the bouzouki; France, the accordion; Chile, the pan flute and India the sitar and tabla and so on.
Didgeridoo is Australia's sonic icon just as Uluru and the Sydney Harbour Bridge are our national visual icons. When people here the didgeridoo they think of Australia. Indeed, Australia's national musical instrument is the didgeridoo.

With permission from Australia's Aboriginal people, it's time to proclaim the didgeridoo as our national instrument, writes Dean Frenkel.

The didge sound is full of complex multi-tonal resonance; a deep endless drone that symbolises our vast land mapped by contours of harmonics, a rhythmic heart beat and the sounds of animals. Like a Gregorian chant it usually explores the tonal possibilities within one note.

The custodians of the instrument, as currently represented by Djalu Gurruwiwi of the Galpu Clan, have given permission to non-Aboriginal people to play it but there is uncertainty over whether women are permitted to play.

Unfortunately the reputation of the didgeridoo has been hampered by an assortment of myths. These include misperceptions that the didgeridoo has no relevance to the 21st century; that didge-playing is bad for the reproductive organs of women, that the rest of the world doesn't value it, and more.

It's time to blow some myths away.

Myth – The didgeridoo is not appreciated around the world

Didgeridoo is treasured as one of the great spiritual instruments of Australia's ancient Aboriginal culture. There are didgeridoo festivals in France, Austria, Germany, England, Italy, Switzerland, Portugal, Spain, Israel and America. In fact it is celebrated more overseas than in its home country. There may indeed be more non-indigenous didge players just in Europe than in Australia.

Myth – That the didgeridoo is traditional to all Aboriginal societies

Didgeridoo is traditional to clans from Northern Australia. The vast majority of Aboriginal cultures have a more contemporary connection with the instrument. The exceptions are clans from the top end of the Northern Territory from the Kimberley to Burketown which can claim continuous practice of up to and possibly more than 1000 years.

Myth – That the only authentic didgeridoo players are indigenous

Myth – That women should not play didgeridoo

It is recommended that women follow diplomatic protocols and seek permission if they want to play it, particularly in the Northern Territory. With permission, didge-playing can offer health benefits to both halves of the population and offer a powerful bridge to reconciliation. There is no scientific evidence of damage to women's health despite warnings from some that claim playing it can lead to infertility. Ethnomusicologists have recorded local women from traditional didgeridoo-playing clans playing the instrument in non-ceremonial circumstances. Some of the world's leading female players include Adele Blanchin (France) and Lies Beijerinck (Netherlands).

Myth – That didgeridoo is inferior to western instruments

Western music schools continue to discriminate against the instrument. It is a form of unstated but functional racism that falsely elevates the status of western instruments, shows little understanding of tone and is culturally ignorant. Didgeridoo is a rhythmic and harmonic instrument that is potentially as complex as any instrument.

Playing didgeridoo is better for the lungs than guitar, violin and even clarinet.  There is no other instrument as potent for health. Didgeridoo has been found by the University of South Queensland to assist people with asthma. Swiss studies have linked it to treating sleep apnea. It strengthens and exercises the respiratory muscles, develops advanced breath control and a special kind of fitness (didge-fitness). The extended breathing patterns also relax the player.

Very few breathing practices can compete with the controlled minimal exhalations of circular breathing. Indeed these controlled exhalations which energise more than they deplete are only matched by yoga masters. It is a genuine non-Indian prana yama breathing discipline.

This is true. Circular breathing practices strategic shallow breathing patterns and exchanges of tiny inhalations and exhalations just like the Buteyko breathing technique for asthmatics. Regular playing is known to boost the strength of respiratory muscles and change some unhealthy breathing patterns.

Truth –That didgeridoo plays the 'Aum', the universal sound as practiced for millennia by Indians

Slow motion film taken from inside a didgeridoo revealed the lips are articulating and playing the 'Aum' phrase hundreds of times per second. The 'Aum' is a sacred and age-old Indian chant that is believed to resonate to the frequency of the earth.

When the lips vibrate into the mouthpiece, the tail end of the instrument transforms the breath into sound and amplifies the tones of the mouth shapes and the tongue articulations.

Truth – That didgeridoo is seriously under-valued in its home country

With permission from Australia's Aboriginal people, it's time to proclaim the didgeridoo as our national instrument. All Australians should take great pride in this gift from Northern Australian Aboriginal cultures to the western world. It is among one of our most important reconciliation tools. As more people learn to play it, the wider world can benefit from Aboriginal technology and healing practices. It is time for the western world to embrace this magnificent instrument. 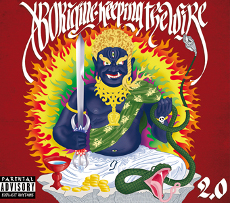