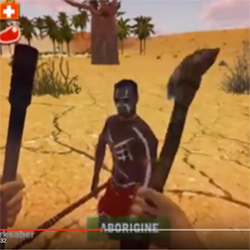 Killing aborigimal people is not a game!

A petition has been launched to ban a game app that involves a player beating to death an "Aborigine" in a quest to survive in the Australian outback....

"Your goal is to survive. Beware of angry animals, especially if you don’t have any weapon. At nights, there is really dangerous, (sic) try to hide somewhere…. Hunt animals or grow plants – you have to eat something. You also have to fight with aboriginals (sic) – you invaded their home!" the developer, Kristina Fedenkova, explains.

A video walkthrough of the game was recently uploaded to YouTube, before being taken down, which shows a player "searching for the natives" before beating an Aboriginal man to death with a stone axe.

The user, R2Darksaber, then loots the body for quest items.

A petition on change.org to remove the game from the iTunes app store has had more than 11,200 supporters.

Apple states in its terms and conditions it will "reject apps for any content or behaviour that we believe is over the line".

Both Apple and the developer are yet to comment.